Learn About the Town of Selbyville’s Library 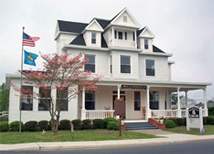 Constructed in 1904, our current Town Library was once the residence of John G. Townsend, Jr. (1871-1964), agricultural pioneer and statesman. He was Delaware’s Governor from 1917 to 1921 and also served as United States Senator (1929-1941), and member of the delegation to the first session of the United Nations General Assembly in 1946. Notable visitors included former First Lady Eleanor Roosevelt, and future President Richard Nixon. Following his death, the Townsend family donated his home to house the Selbyville Public Library.